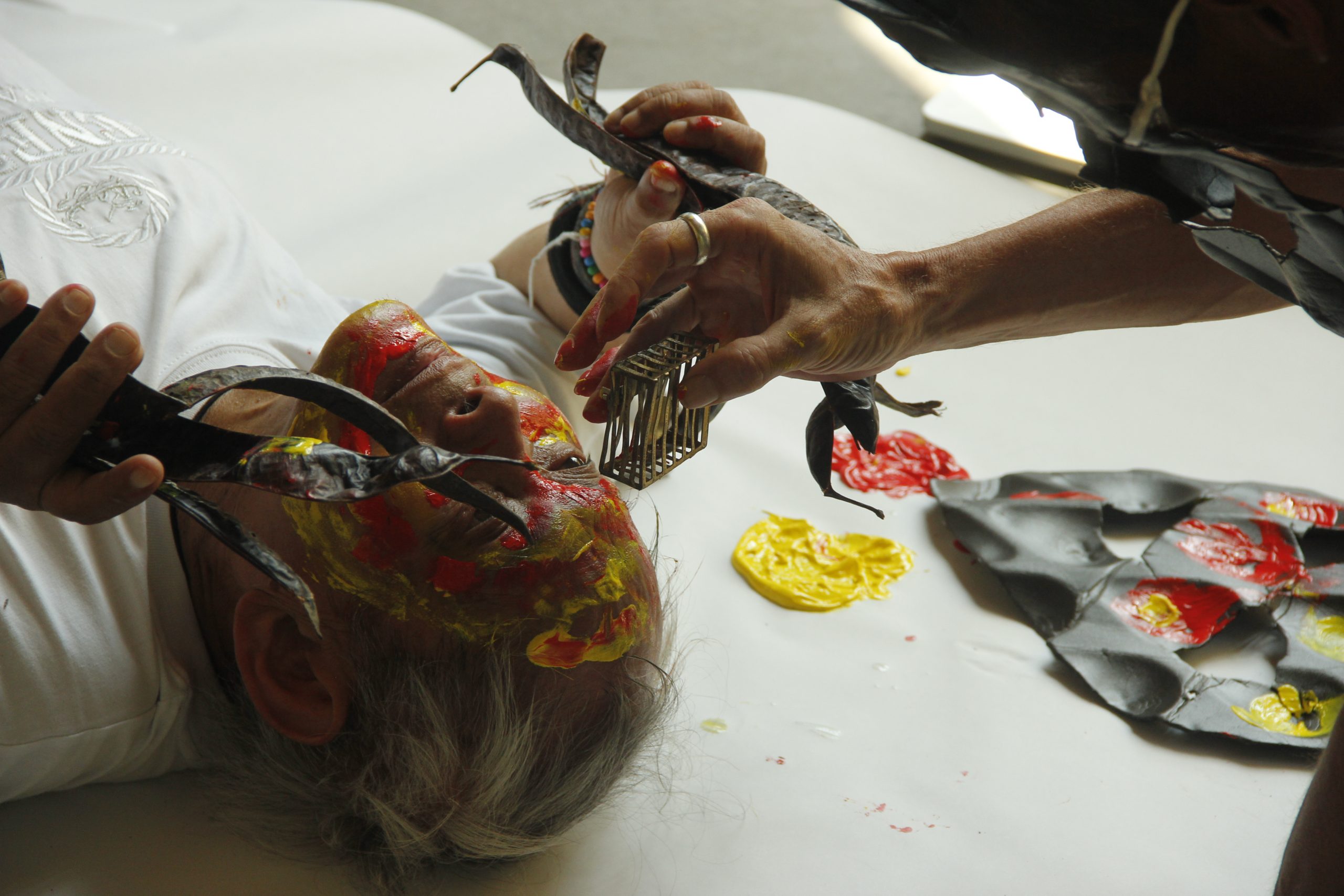 Watch excerpts of David Medalla’s four performances in Italy, in 2015. These performances were collateral activities of the Philippine Pavilion exhibition Tie A String Around the World curated by Patrick D. Flores.

According to Adam Nankervis, “The Dreams of Panglao was David’s initial idea for the 2015 Philippine Venice Biennale…I just got back from Lighting Ridge and I am a vivid dreamer and occasionally kept diaries of my dreams. David came back from Bohol where he remembered his dream vividly, which was rare. David wanted to go back and trace Filipino traditions which he finds are being lost in modern Philippine culture or being consumed by the American model. So he wants to go back through dreamtime, bring back past rituals through old tradition of communicating. It’s also about our affinity as Island people. We travelled nomadic Islands, as we are always travelling; and that experience of travel, which we did autonomously and shared, ad we wanted to sew them together on a performance stage. Tie A String is very much David’s ode to the traditions he grew up with, having been born before the war that decimated Manila. He was privilege enough to experience the old culture.” In the performance, Adam laud out a long white sheet on the floor. In the middle of the sheet was a miniature gate sculpted by Australian artist Misha Dare, which depicts the moon in captivity, referencing the “political trends that affect aboriginal tribes.”

A contingent of Filipino met with David and Adam at the Santa Lucia station in Venice to catch their train for the Italian world wandered Antonio Pigafetta’s Vicenza, some forty minutes away. David read on the train a story he made about Pigafetta and his journey around the world, including his travel with Magellan and how the Portuguese explorer met his death at the hands of local chieftain Lapu-Lapu. The narrative was staged through an imaginary conversation between a boy and Pigafetta. After spinning his fable, he unspooled strings that stretched from one end of the coach to the other. Passengers, who included some tourists from Poland, held the string and were handed out plastic bags. They were asked to fill them with anything, any potential votive object, and to breathe into each bag to capture a sense of memory. These were to be offered to Pigafetta, as a symbol of gratitude for his contributions to history. A drizzle greeted the group upon their arrival in Vicenza. They walked to the monument, which was across the station. It is in a part frequented by migrants of the city. They moved around the statue as they held on the strings, with the plastic bags, singing Chitchiritchit Alibangbang. David again mentioned Pigafetta’s role in Philippine history, the history of the world, and thanked him for the work he has done.

Following through the action at Pigafetta’s statue in Vicenza, David requested the group that went to Vicenza to form a straight line in front of the audience, and wear the masks he made from magazines and newspapers. He asked the group to wear the paper masks while singing the traditional folk song Chitchiritchit Alibangbang.

He went through several movements to sort of annotate or flesh out the lyrics that he asked the group to perform with him. He then led the participants to find partners among themselves and nudged them to bite each other. Members of the audience were also invited to participate. The second performance involved filming a spinning glove while being layered with thread used from the Pigafetta performance. Adam also projected a short video he and Daniel made of the Pigafetta performance onto a wall, which shared space with a neon work of David Kosuth.

David began by sharing that he knew Peggy Guggenheim. He was close to her daughter Pegeen. He said he even slept in the museum in the seventies. He explained the concept of his performance to the interns of the museum. He distributed sheets of paper and asked them to fold the paper and make butterfly wings. David said his performance was inspired by an English filmmaker he met earlier who had told a story about how he, while waiting for the sun to rise, was bitten on the face by a mosquito. When he was about to slap it, he realized that it was actually a caterpillar turned into a butterfly. David appointed his long-time collaborator, Adam, as the king of caterpillars wearing a bright red mask. He then urged the audience to carry the train of textile and join Adam, He also convinced the crown to sing the Filipino folk song Paruparong Bukid. Slivers of light and neon tubes by artist Marion Mertz illuminated the garden.

The City Who Had Two Navels

In Search of Bayanihan